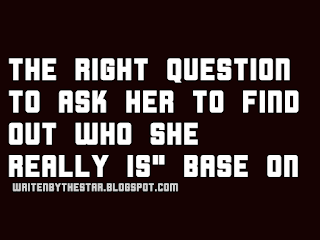 What do you wish you were more knowledgable about?


Do they wish they knew more about cars? Geography? History? A certain culture? This sign has a thirst for knowledge, so it kills them to admit they don’t know everything there is to know.

What is a phase that you’ve never grown out of?


Gemini are known for being fickle, for changing their minds all the time. So you’ll learn a lot about them by finding out which band or show or hobby they’ve loved since childhood — and have no intention to stop loving.

What was the worst loss you have ever suffered?


Cancers develop close relationships with their friends and families, so hearing about the death of (or the separation from) a person who meant the world to them will give you an insight on who they are.

What is your favorite thing about yourself, aside from any physical aspects?


Leos take pride in their appearance. But it’s nice to see what they appreciate most about themselves when they dig a little deeper, beneath the surface level.

Have you ever had a supernatural experience?


Virgos are logical, intelligent, down to earth. It might surprise you to hear them talk about ghosts, psychics, or extraterrestrials. It might help you see them in a different light.

What reoccurring dream (or theme in your dreams) bothers you the most?


A person’s dreams can tell you a lot about them. It can give you a glimpse inside of their soul.

What is the worst thing you’ve ever done?


This sign is complicated and frequently misunderstood. Hearing about their worst memory from their own point of view will show you a side to them that most people never get to experience.

What is your love language, how do you show affection?


This sign hates mushy, romantic gestures. They usually don’t come straight out and say I love you, so it would be helpful to know what they do instead when they truly care about someone.

What is the most eye-opening novel you have ever read?


Capricorns are intelligent. They love having stimulating conversations. If you get them talking about a book that has meaning to them, they will never shut up. You will see a brand new side to them.

What motivates you to get up in the morning?


This sign has a bit of a lazy streak. That’s why you should find out what causes them to stop hitting snooze and actually gets them excited about the day ahead of them.

What is the longest, strongest friendship you’ve ever had?


Pisces are social butterflies. They thrive on interaction. Learning how they met their closest friend and the journey the two of them took together will tell you all you need to know about them.