This is often a year of tremendous change.

It is common for individuals with an 8th house Sun to change their lifestyle completely during this year.

The emphasis is on radical change.

Usually, there is at least one major change during the year accompanied by many minor changes. Mental stress can result .
The 8th house solar return Sun is generally associated with disruption and change.
This placement is the single most important indication of a major transition in the solar return chart. It is common to experience changes that affect every area of life. Also read, Example chart case study - sun in the 8th of Solar return.

Typical events include, but are not limited to: relocating to another state or country; quitting work; retiring; becoming a full-time student; having your first child; returning to a career after years at home; separating or divorcing a partner; or leaving your parent’s home to live alone in your first apartment.
A more remote possibility would be an event that involves you or a loved one having to face physical death or a life-threatening illness.
Changes that occur with the Sun in this house are anxiety-producing but not necessarily difficult. Read here if you want to know If Your Calculations in your Solar return chart Are Correct
They increase your ability to empower yourself. This Solar return house has a reputation for power struggles around sex, money, and morals.
It is common to either find yourself being manipulated in one or more of these areas, or to attempt to manipulate another.
It is through the peaceful resolution of these issues or the disengagement from the struggle with them that true power is gained. Manipulation only traps everyone involved. If you want to know when to expect the major transition periods of your life, consider the cycle of the transiting outer planets learn more here.. 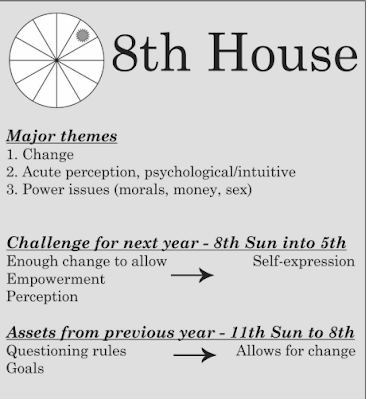 When Pluto makes a conjunction to the Moon, you are being drawn into a great lesson regarding power and empowerment.
Moon conjunct Pluto in the solar return at its worst implies power struggles for physical, emotional, sexual, or financial control. If you are the one attempting to control someone else, it is probably a lost cause.
MOON IN THE 8TH HOUSE Of Solar Return Astrology chart
The 8th house is the house of acute awareness of emotional forces and psychological powers. Nearly all of this awareness will result... Read more ...
MERCURY IN 8TH HOUSE Of Solar Return Astrology chart
The phrase "acute awareness'' encapsulates the interpretation of  Mercury in the 8th house of the solar return. Your mind is more insightful and reflective during this year, and there will be times when you will see more or know more. Read more ...
VENUS IN THE 8TH HOUSE Of Solar return Astrology Chart
Relationships will tend to be more intense and complicated during the year. Psychological forces will play a strong role. read more ..

The SUN in 5th House in SOLAR RETURN CHART Interpretation

In order to fully understand the cycle of the Sun in the solar return houses, it will be necessary to follow the Sun's yearly path, which is clockwise, and usually moves through three houses. For example,   the Sun in the  1st house  in this year's solar return will probably move up to the  10th house  next year,  assuming certain conditions:
Read more

The SUN in 4th House in SOLAR RETURN CHART interpretation

The Sun in the 4th house Solar return chart indicates that the individual is looking for a physical, emotional, and spiritual home:  The one place in the Universe that becomes a special niche on all levels. This house is the root or support system for the rest of the solar return chart.
Read more