How we act at work base on Zodiac 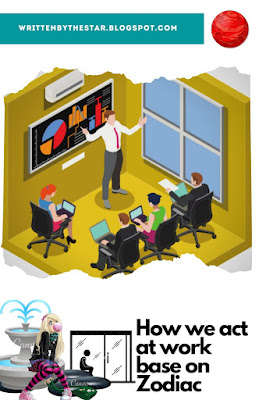 How we act in public workplaces is important as well, and varies from person to person, as well as from #ZODIAC sign to sign. Some take their responsibilities very seriously, knowing that a paycheck is the goal, and that without it, life gets very difficult. Others slack are are uncaring. Some are interested in careers, while others maintain temporary jobs.

But all of it revolves around work ethic and how we act at work. Here are a few examples of how the zodiac signs act while at work.

Driven to get the task done, Aries shows up on time and treats the job with respect. They are not there to merely collect a paycheck — they are there to make a difference, and they pour themselves into their job.
Whether it's as a freelancer or a salaried position, Aries gets the job done enthusiastically.


Less inclined to lift a finger, Taurus is somewhat problematic when it comes to working. They are so lazy, so uninspired, that for Taurus to really get involved they have to care about what they're working for.


Gemini does not like to take orders or perform in a disciplined manner, so they choose jobs where they can act independently. Gemini works best alone, but that's not to say they should work at home (they do not like being at home).

But you will find Geminis choosing jobs that have no boss and are able to be done on their own time.


Cancer is the cutthroat worker who will throw other employees under the bus. While they are indeed hard workers, they are also treacherous and cannot be trusted by fellow employees.

They are fearful of losing their jobs so they tend to place blame on others for their own poor efforts.


Unless the job is one where they are either the boss or the center of attention, Leo is basically a stay-at-home lazy bum. They will partner off with people who will do the work just so they don't have to.

Pay them a ton of money to star in a movie and they're there with bells on. But anything less and it's back to the jungle for long stretches of doing nothing.


They may not necessarily be found in interesting job situations, but no one takes the job as seriously as Virgo. They show up, put in their hours, mind their own business and get the work done.

Sticklers for details, you'll find they make the best office workers around.


Libra won't be caught dead in an office — not if they can help it. Work ethic is strong, but unconventional with this sign. They are big on selling things. and collecting things to sell at a later date.

You'll find Ebay and Etsy filled with Libras, all selling their wares online... and making good money doing so.


Fiercely dedicated to the work scenario of their choice, Scorpio has no problem with the idea of hard work and hard play. They know the score: If you want the good life, you have to put in the hard work hours, and they do so very easily.


They fully grasp the concept of work ethic. If you want to play, you have to pay.


Sagittarius works in their sleep as well as in their waking hours. The nonstop thinking, examining and wondering is what propels them into creative positions in the workplace.

While they prefer home jobs, they are popular with bosses and authority figures. They are reliable workers, much like work horses, to be exact.


Work is what life is about for Capricorn, and bless them for that. This sign is all about management and performance. They are often the ones who rise to the top.

Capricorn will always find themselves in the top dollar executive position at any company, and they are also the ones who stay with one job forever.

If they must work, they usually end up losing their jobs due to lack of focus and general disinterest in working.


Work is a necessary evil, and if they must, then they do. Pisces is happy to work, at an office, at home, in a kitchen, in a store, but their true preference is to stay at home and be a homebody.

Office work is just fine for them, though they have no attachment or loyalty to the job; it's just what must be done. For Pisces, work is what you do before you get to watch TV with the family.