How to manipulate a Pisces 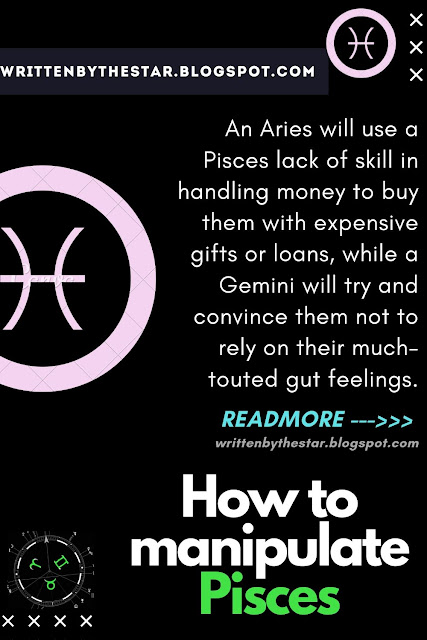 Pisces are the last zodiac sign in the calendar. They represent the time starting at the end of February, when it is still cold, but the beginnings of spring are palpable. Everything is in the act of becoming, the world is hidden, and buds and leaves are waiting underground. Nothing is certain, everything seems to be sleeping and dreaming of future possibilities without the need to be tied down. This also describes the nature of a Pisces.

They are dreamers, closed-off people who are more likely to be engaged in a dream world than anchored in reality. They don’t like to make...
commitments, remain in the abstract, and are controlled more by feelings than rational considerations. They possess a great longing for love, bliss, and fulfillment, making them susceptible to abusive relationships and a variety of addictions. They don’t like to go against the flow, quickly react in an offended or hurt way, and are good-natured and benevolent. Pisces thrive on inspiration, and often inspire others to create art. Spirituality and art play an important role in their lives. The 12th house, which they represent, stands for transcendence, cosmic consciousness, spirituality, and dreams.

<-->
Pisces seek out inner truth, and are full of compassion for other creatures. Both of these aspects make them susceptible to manipulation. Libra has the greatest manipulative effect on people with the zodiac sign Pisces, as the eighth sign.

Pisces can’t handle crises and setbacks well. They lack energy, decisiveness, and the courage to make choices, which they need to deal with these kinds of challenges. Instead, they withdraw, become addicted to daydreaming or substances, and forget reality. A Libra can take advantage of this condition by influencing a Pisces to make bad decisions. They could be attempting to push the Pisces into emotional dependency, or just to manipulate them in general. Pisces easily lose their inner compass, leaving them helpless. Libras can cause them to believe they are taking over leadership responsibilities, plunging them into misfortune.

An Aries will use a Pisces lack of skill in handling money to buy them with expensive gifts or loans, while a Gemini will try and convince them not to rely on their much-touted gut feelings. Pisces, similar to Cancers, make decisions from the gut. However, it is difficult for them to make clear decisions, and they are often hesitant and have a hard time making commitments. They usually keep an escape hatch open somewhere. Scorpio can attack here, by declaring this behavior as cowardly and hypocritical and maligning the Pisces in front of others. Leos can force Pisces into too many concessions to reality, which will make the Pisces unhappy. They need their dream world to feel complete and at home.

Virgos take a similar approach by talking Pisces out of this dream world and forcing them to accept large numbers of obligations. Saying “no” isn’t a strength Pisces have, making it easy to get them to do things they don’t actually want to do. Cancers, on the other hand, will reinforce the Pisces tendency to flee from reality, which can cause serious difficulties for them. They can entice them to consume alcohol and drugs and keep them from fulfilling their duties. Capricorns can also use the Pisces’ tendency to daydream for themselves, by painting reality as highly negative and making Pisces feel as though they’re too weak and unstable for this world. Aquarians, on the other hand, will desecrate everything important to the Pisces using biting or insulting comments, while Sagittarians will constantly threaten to leave Pisces, which is a way to blackmail them. They will offer themselves up as protectors, simultaneously fulfilling two of Pisces longings: the longing or a protector, and the longing for love.

The Pisces’ inconstant character makes it relatively easy to influence them. It’s not in their nature to be tied down to reality. However, this means that a manipulation may not have a very strong or long-lasting effect. Pisces are highly emotional people who have a difficult time differentiating themselves from others. They experience others’ sufferings as though they were their own. This great compassion is another way for others to influence them. As a Pisces, it is important for you to maintain your contact with reality and to seek out people who can balance you and ground you, and who are trustworthy. You should always be cautious if someone attempts to encourage you to use drugs, alcohol, or other addictive behavior to escape reality. Dreams and inspiration are important, but they’re just one aspect of life - you need to experience other aspects as well. Your deep need to be loved makes it easy for others to manipulate you, as does your desire to be protected. Love should never come with conditions. The search for a protector is a childish way to escape reality, and stops you from leading a happy adult life.