May 30, 2020
Sure, all zodiac signs have their good qualities but no one ever talks about their demons side.
Knowing, realizing, and understanding what each horoscope sign does wrong will help us develop better as human beings. That means admitting your mistakes and confronting your darker side.

Here are the creepy sides to each zodiac sign I hope you don’t ever have to experience, personally.
#starsign 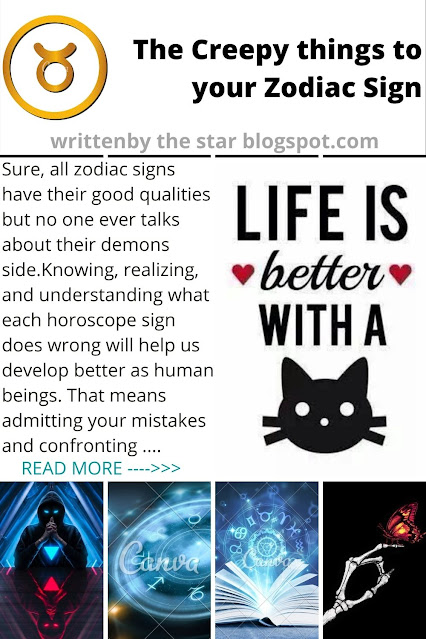 The creepy side of an Aries is the fact that he’s always thinking about death. The ram probably spends the majority of his day thinking about the concept of death and how each person will end.

The creepy side to a Taurus is that he’ll always have his eyes on you, stalking your every move on social media. Even if you break it off with the bull, it’ll take a while before you don’t feel a pair of eyes wandering around you.

ALSO READ: The types of insults that offends you the most base on Zodiac

The creepy side to a Gemini lies within their duality. Because of their two-faced nature represented by the twins, they make impeccable liars.

The creepy side of Cancer is their obsession. You read about how a Cancer is quite clingy in a relationship all the time and some people adore the extra attention they get. But sometimes the clinginess can turn into an unhealthy obsession that’ll suffocate you eventually.

Leo is known for, well, being Leo. Leos are highly obsessed with themselves and that in itself is creepy enough. Leo will do practically anything to reign authority and put themselves in the center of attention even if it means hurting others and overstepping boundaries.

The creepy part about Virgo lies within their quirks and the fact that you don’t expect them to have a freakier side. Having fetishes are not unusual but Virgo can sometimes take it to the extreme.

The creepy side to a Libra is how much he knows about everything, especially darker topics. Your Libra friend is probably the first to discuss the new criminal documentary on Netflix and lay out the gruesome details for you.

ALSO READ: The types of insults that offends you the most base on Zodiac

The creep side to a Scorpio is the fact that he has a lot of dark thoughts, like a lot.

The most creepy thing about a Sagittarius is that under all that optimistic, friendly nature, he doesn’t feel emotion.

The creepiest trait about a Capricorn is how he fantasizes about murdering people, especially if they pissed him off in some way.

The creepiest thing about an Aquarius is that he probably already has a eulogy written for all of his loved ones.

The creepy side of a Pisces lies within their hero complex.