What Distracts you From Work at home according to Zodiac 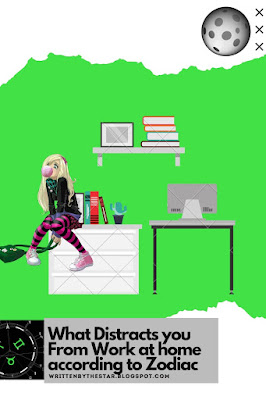 Based on astrology, the object that interrupts our concentration on something can differ from person to person.
Use astrology to find out what distracts him from work at home  and makes him lose interest in performing his job, according to Zodiac, keep reading!

-This man is constantly looking for new challenges. So naturally, even the subtle indication of an exciting new challenge could definitely distract him from work.
-It’s hard to distract this man, especially when he is at work. But he does value his comfort above all. And so when that is threatened, he could be distracted.

Subscribe to RSS headline updates from:
Powered by FeedBurner

.  -This guy is easily distracted. And it’s mostly his mind that is the greatest source of distraction for him.
-Cancer is the first water sign in the zodiac wheel. And emotional turmoil could really get to this guy. If his emotional life is in disarray, he could find it difficult to concentrate at work. Random thoughts concerning the cause of that issue would distract him.
ALSO READ:
-This is one of the most creative men of the zodiac. So if he is not already in a creative field, other creative outlets might distract him.For instance, many dream of being on the big screen or even in the theatre. So an opportunity to be on either might be distracting for this man.
-This is the sign of productivity and efficiency. He usually loves his work and is rarely distracted. But he also has a nervous mind, which combined with his mercurial nature, can distract him from work.For instance, he might be so worried about his future plans that thoughts of it can divert his attention.

-Social situations mean everything to him. So the social life at work is a cause of worry and distraction for this man. Suppose a coworker does not particularly like him and he knows it. This would definitely keep him from fully focusing on his work, especially if he has to *gasp* interact with that coworker!
-This guy is all about power and intensity. He cannot stand being outdone by someone else. His need for control is legendary. So if someone at work has got the upper hand, he might be distracted. He just can’t get over it and will brood over it endlessly.
-Being the fire, mutable sign, this guy has lots of energy and interests. In fact, all things from religion, philosophy, politics and poetry have the ability to pique his interest. That is why at work, the latest development on the political front could lead him to engage in a heated debate with his colleagues. Similarly, he might be unsure about his religious beliefs, which could distract him from his tasks.
- This man is known to be a workaholic, who cares about nothing but success in his chosen field. That is why his main source of distraction is the next big thing.The idea of a new project that he is dying to start working on can divert his attention from what he is currently working on!
- He is a deep thinker and problem solver, first and foremost. So any new issue at work or even at home could divert his attention from actually doing his job. Most likely, however, the source of his distraction does not immediately concern him.

LEARN MORE ABOUT YOUR BIRTHCHART