How a #Scorpio REALLY Sees You

Aries – As a Twin

It is a love-hate dynamic. Not because we do not understand each other, but because we are too similar. Same level of temper and ambition. After all, Aries is Cardinal Fire and Scorpio is Honorary Fire; and Aries’ father Mars is Scorpio’s ancient ruler. Between the two, there can be irritation and intimidation. But at the end of the day, nobody really comprehends Scorpio like Aries does.

Taurus – As an Ally

Great at marathons and other challenges of endurance, ----->> 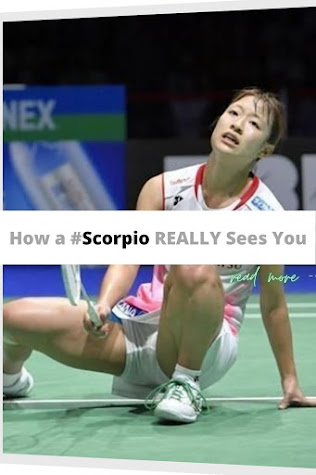 Taurus is an asset to Scorpio. We both have an inner sense of stability, long-term vision and the capacity for patience with a purpose. Of course both being Fixed signs, there may be clashes at times. But also because both are Fixed signs, our values deep down tend to align.

Gemini – As a Potential Enemy

Scorpio is capable of the deepest kind of love. But not because Scorpio loves you means Scorpio trusts you. Gemini at its core has the tendency for duplicity. A manipulative streak that may be calmed but never really killed. That is why Scorpio can greatly enjoy Gemini’s fun personality, while never forgetting that with them, falseness is always a possibility.

Cancer – As a Cousin

You love some of your cousins. Others, you hate. Others yet, you have absolutely no feelings for. Scorpio and Cancer are similar but not alike. Both being Water signs, our level of sensitivity and capability for strong emotion should be comparable. But Cancer’s passive-aggressive tendency is something that makes brutally-frank Scorpio reject their company.

Leo – As a Soulmate

At their best, Fixed signs Scorpio and Leo are the most loyal of the twelve. They also tend to have the greatest sense of self love — something deeper and more meaningful than simply being egotistical. And so when you combine two people who truly love themselves and who are also capable of pure faithfulness to somebody else, then what you have is a connection that will last for ages.

Virgo – As a Best Friend

There is simply no friction between Virgo and Scorpio. Earth and Water will always create harmony together. And even though Virgo’s intensity is practical while Scorpio’s intensity is emotional, at the end of the day, intensity is still intensity. That is something we recognize and admire in one another. Because of mutual respect, we give way to each other’s peculiarities.

Libra – As an Acquaintance

It is not impossible but it is difficult for Scorpio to forge a profound and lasting connection with Libra. Because Scorpio is deep water, and Libra is carefree air. The former craves stability that the latter seems too breezy to offer. Scorpio needs more than what Libra can usually give, and Libra tends to be afraid of Scorpio’s depth anyway. So we just smile at each other from afar.

Scorpio – As a Potential Rival

We are chameleons and can wear any face we want for the day. That is why, of each other, we are very wary. Dealing with another Scorpio feels like having a gun pointed at you, while also pointing your gun at somebody else. Either could go off at any minute. Both people will have strong opinions and even stronger personalities. When not kept in check, explosion is an inevitability.

Sagittarius – As a Younger Sibling

Scorpio sees Sagittarius as a cooler kind of fire. We share Aries’ temperament and Leo’s self esteem. But somehow, we do not have a lot of common ground with Sagittarius. They are, to us, a safer, more transparent version of Gemini. Very fun and sociable. But never quite capable of understanding us the way their Fire siblings Aries and Leo can.

Capricorn – As a Peer

Scorpio has deep respect for Capricorn. Because this Earth sign knows the true meaning of hard work, commitment and never taking any shortcuts. Even more, Capricorn can be just as ruthless as Scorpio when it comes to things they truly believe in. And that is something that Scorpio gladly acknowledges and very much appreciates.

Aquarius – As a Wildcard

We love some. We hate some. And even those whom we love, we despise sometimes. Aquarius is Fixed Air. But “Fixed” seems to be less prominent than “Air”. We appreciate their innovative mind and fearlessness of being different, but we see in them a tendency for frivolousness and instability that we would rather stay away from.

Pisces – As a Child

Water at its calmest, Pisces is very sweet and soft-spoken. Scorpio enjoys this submissiveness. We do not see it as a weakness, but rather, something endearing that needs to be protected. Moreover, romanticism, creativity and mysticism are abilities these signs share very strongly. There is altogether between the two a deep kind of affinity.