Astrology in the Gospel of mark

June 06, 2020
To anyone familiar with zodiacal symbolism, however, the man carrying the water jar is immediately recognizable as the symbol of the sign Aquarius. But why should he appear at this point in the narrative? And why should other Aquarian images appear close by, images of social upheaval which would be announced by signs in the ‘clouds of heaven’ (Mark 13:26)?
More intriguing still, why are these Aquarian images followed by an array of Piscean ones – betrayal, suffering, sacrifice – as the Gospel draws to a close? If these two signs, the final two of the zodiac, are so clearly evident, is it not just possible that the others are present, too? Indeed they are present.
Not with the obvious pictograms of the signs (although at least one other of these is present), but with imagery and themes drawn from zodiacal mythology and psychology. In fact, the Gospel can be divided with no trouble whatsoever into sections which bear the characteristics of each of the zodiacal signs. This only applies to Mark’s Gospel. Although the other two synoptics (Matthew and Luke) contain much of the same material as Mark, the stories are ordered differently. Similarly with John: there is no zodiacal order. The ‘zodiacal’ sections are shown in the table below:

The ‘zodiacal’ sections base on Bible are shown in the table below: 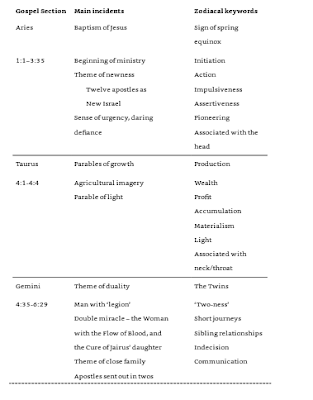 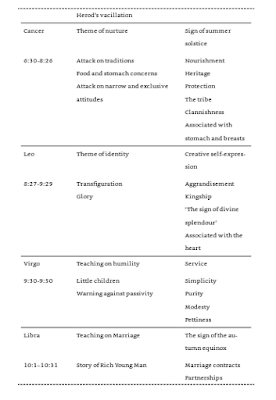 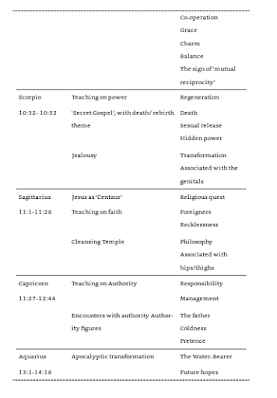 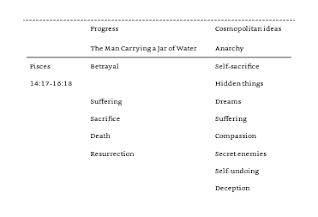