#PISCES: Have you a secret fear of success?

Artistic, talented and truly humanitarian, you Fishes seem destined for real accom-plishments in life. But when you fail to live up to your potential, you're apt to blame the cold, cruel world. The real reasons, though, are often more subtle and psychological. 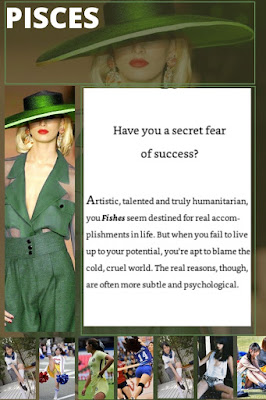 of what it can entail. Highly sensitive, you might fear the criticism or lack of privacy you would be open to if in the public eye. You are even likely to pass up a job or promotion if you felt it wouldn't afford you time enough alone to regroup your forces.

You're also plagued by doubts about your abilities and how to market them. While you hesitate to push yourself forward, you're al so afraid that you will be overlooked—or that you'll be noticed but found lacking. Deep down, you may even think you aren't worldly enough to handle success and all it offers. But when you recognize and confront these self-defeating attitudes, you'll be on your way to a more fulfilling future.