#PISCES: How to boost your self-esteem

Your success in life depends to a great extent on the image you have of yourself. As a Pisces, you generally project a poised and compassionate self to others. But many times you may feel far less sure of yourself than you appear. Because you are so open and sensitive to the emotions of others, you can be easily influenced by them, so much that you sometimes forget who you are. This sensitivity also makes you more vulnerable to hurt feelings.

When your self-esteem needs a boost, here are three positive things all of you Fish can do: 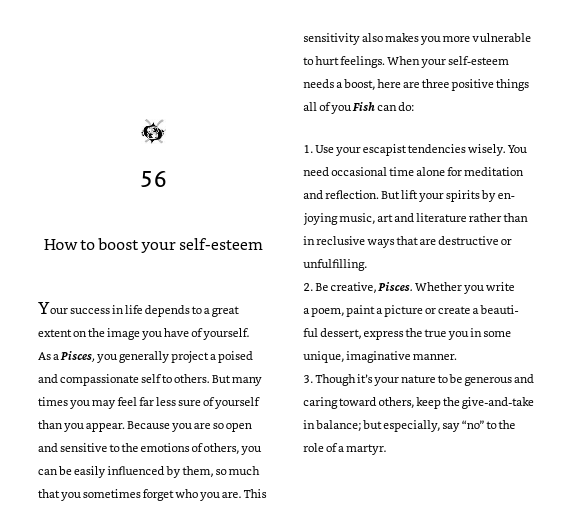 1. Use your escapist tendencies wisely. You need occasional time alone for meditation and reflection. But lift your spirits by en-joying music, art and literature rather than in reclusive ways that are destructive or unfulfilling.

2. Be creative, Pisces. Whether you write a poem, paint a picture or create a beautiful dessert, express the true you in some unique, imaginative manner.

3. Though its your nature to be generous and caring toward others, keep the give-and-take in balance; but especially, say "no" to the role of a martyr.

PISCES Vs The Zodiac: The Manipulative power

Pisces stand for the deep, unfathomable and mysterious. They are very sensitive, both in terms of their own suffering as well as with respect to the suffering of others. Their desire is to go with the flow and avoid all obstacles. They are true masters of unconscious manipulation. This is namely their innate ability, which they use very often and often cannot help it. Their house is the 12th house of the psyche and this is about everything that cannot be seen with the naked eye, what we only feel, guess and suspect. The Pisces is at home in this world, which makes most other people rather afraid.

Pisces can manipulate each other insofar as they support each other in their latent denial of reality. Not all conflicts can be avoided. learn More...

If the Pisces wants to manipulate the Aries, the Pisces needs do nothing else than avoid the Aries's ill-considered and hasty attacks with a short fin stroke. Learn More..