Destruction. Rebirth. Resurrection. These words are often used to describe Scorpio, a fixed water sign, and while all of them are true, they aren't the full story.

Scorpio's intense and sweepingly powerful emotions often make him feel as if he's been seized by a force beyond his control. In spite of how he feels, this sense of outside forces is just an illusion. His emotions are his allies. They provide him with an immediate and direct connection tothe deepest parts of his intuitive self and are capable of instantly transforming his reality.

This transformation occurs when he brings his considerable will, intent and burning desire to bear against whatever it is that he wants to change. When his energy is so ... ---->> 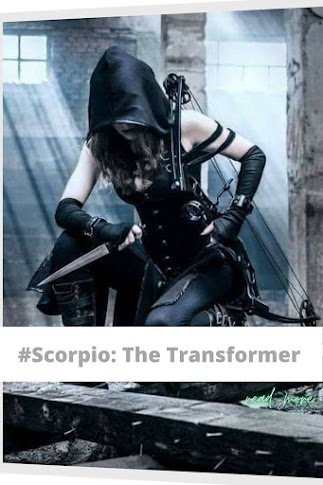 laser-focused and backed with passion, this change occurs at the quantum level and can result in the remission of an illness or disease, sudden rise to wealth and fame, an explosion of psychic ability or landing the dream job. His reality changes—and can do so in a heartbeat.

His emotions permeate everything he does, every choice he makes, every thought he thinks and every dream he has. They are the lens through which he perceives himself and his world. And sometimes they nearly overwhelm him.

Scorpio is also about power—the power he wields over others and the power others wield over him. This power is sometimes misused and then its tremendous capacity for positive transformation turns negative. Self-awareness is what spells the difference. 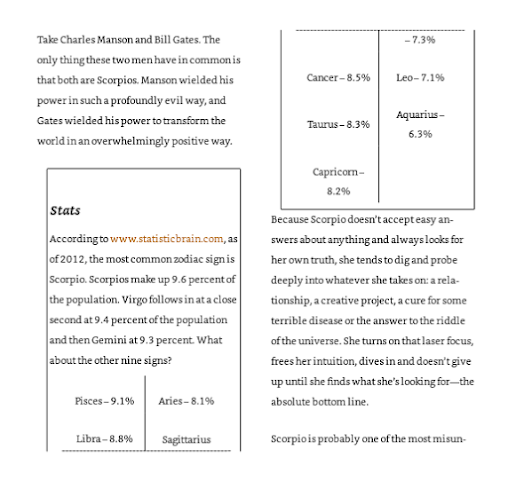 derstood signs, often associated exclusively with intense sexuality. In fact, some de-scriptions of Scorpio that I've read over the years make her sound like a sex fiend or like some sort of primitive human who lurks through shadows and darkness in search of a sex partner. The truth is that sex just for the purpose of sex doesn't interest her as much as sex as a means to a deeper kind of knowl-
edge about her partner. She's after the whys
and whats that have molded her partner, and sex is a means of uncovering that. Even when she's involved in a relationship that is strictly sexual, there are always more di-mensions to the relationship for her.
The other element that is so often associated
with Scorpio is secrecy, but its due to a lack of trust and a reluctance to let just anyone
into the privacy of her head, the sanctuary of her being. People must win her trust, and
it isn't easily won. Beneath her smoldering sexuality and pierCing insights lies a toughness that others may sense but may not be
able to define. She's an enigma even to the people who know her well, and much of the time she's a mystery to herself as well.

If you feel that someone in your life is a Scorpio but you don't want to ask what his or her sign is, there are ways to tell: His eyes. Scorpio's eyes are often intense, with a piercing quality. He looks at you in a way that makes you feel he's peering into your soul.
Her interests. Does she talk about the
paranormal? Things that go bump in the night? The weird and the strange? Is she preoccupied with death or life after death? What kinds of books does she read? What kinds of movies does she like? The Lovely Bones or the Harry Potter books and movies would be more her taste than Birdman.  His voice. Scorpios often have low, husky voices or seductive voices.  Her presence. Every Scorpio generates a powerful sense of presence.